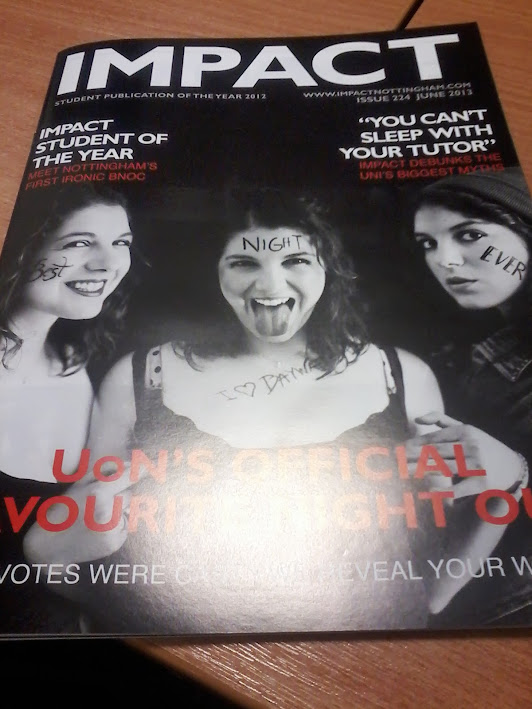 It was Tuesday(02/07.2013). It was cloudy and little shower day in the summer. I had thought that during summer session, the sun will shine all the day in the UK. The fact was totally wrong. Probably, only once a week we had a real summer day.

It was simply an ordinary day. I went to the lab in the morning and went home at night. However, since the vacation days, in this summer I break. I have made change my PhD life pattern. Previously, I stayed all the day in Jubilee campus. During this vacation period, I moved to University Park after 06.00 PM and stayed in Geroge Green library afterward. The reason was I had no friend during Ashar and Maghrib prayer in Jubilee campus prayer room. Luckily, we had some in the University Park Campus. I wanted to keep “istikomah” to be constant in making Jamaah Prayer for five times.

Nothing to confess for today except that I had been working with Hyflex and  reading paper discussing on hyper-heuristic implementation to examination timetabling problem.  By the way, I got a “Muffin” cake from my Saudi Arabian female friend. Thanks Han**n for the cake. 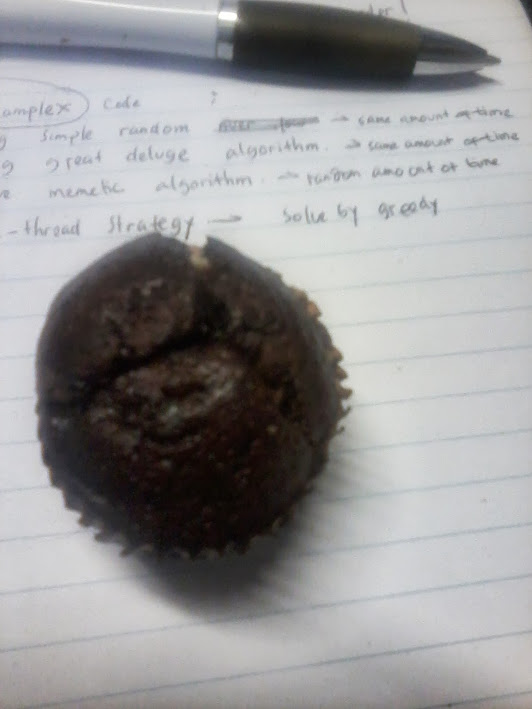 I felt less-productive and need to work and study harder and harder. To be honest, I felt embarrassing with my office mate, a Chinese girl who are very-very hardworking such as typical Chinese student. I had only two years left, I should run faster to gain my passion. Thanks ya Allah, help me to reach it. I felt lonely as usual, but gradually I found the beauty of being lonely. It is not always painful, apparently. It is a perfect time to do something that needs nothing but myself and its self. 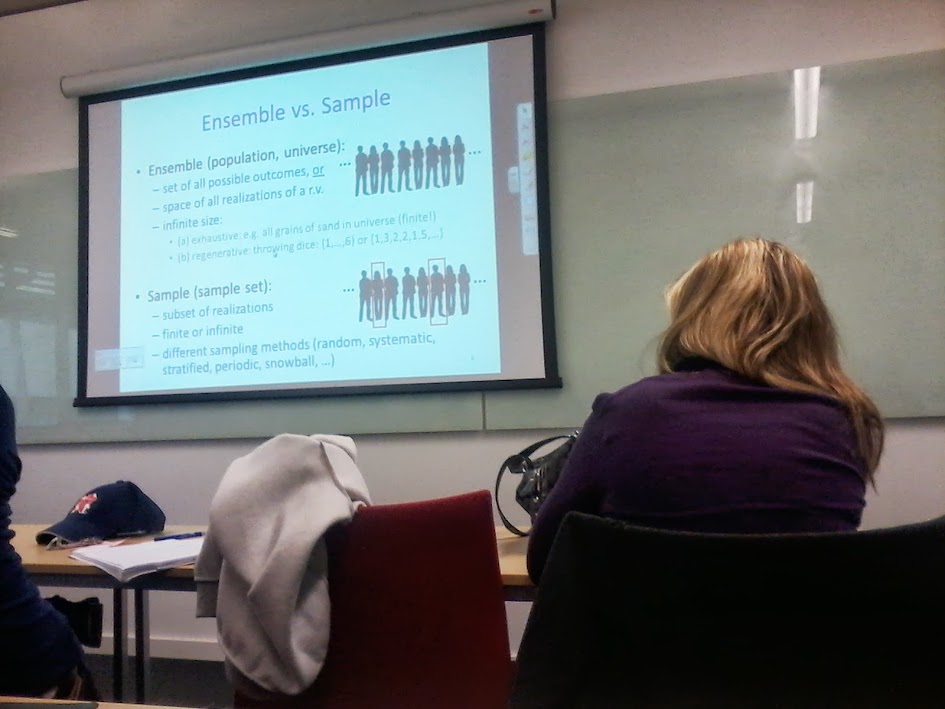 It was Thursday (13/06/2013). It was rainy day in the summer. It was one of the heaviest rain I had ever seen in the UK. It was typical to have a light shower a long the year in the UK, but it was truly heavy rain as in Indonesia. I went to the campus quite late again, since I felt slept after the dawn prayer. Summer was sometimes not easy for me. I had very short night. The Maghrib was at 09.30 PM and The Subuh was at 02.30 AM. I had to go to the sleep at most 11. pm and woke up at 02.00 am. Therefore, I frequently fell slept again after the dawn prayer.

Since I was fasting, I did not prepare my food. I left home at 09.15 am. The main road connecting my home with the University was very crowded. There was quite terrible traffic jam. I run crossing the main road on the zebra cross. I had to attend  statistical and stochastic method for scientist and engineer short course in Engineering and Science Learning Center at the University Park. I was interested with the course, since I attended the similar course at University of Lancaster several months ago. It was difficult course indeed. I must be dealing with Integral that made me bored accidentally. The class was full at the beginning, then one by one people gradually left the room. I thought they were stressful and frustrated like me. At the end of the class, there were only a half of students remained. It was four days course works, but I was not sure whether I would come to other three days or not. I was happy at the beginning, but I was very sleepy later on. I left the class at 01.00 pm, a half hour before the course officially ended.

PhD is School of  Thinking

After making the Dluhur Prayer at Portland Building, I went to Jubilee campus by Hopper Bus, staying in my lovely Lab.  I saw my Spv in his room. I did hope, he would give me a bunch of feedback on my report. But, apparently I was totally wrong and surprisingly he just gave me a very new book, entitled a guide to experimental algorithmic. Like the other books he had given to me, It looked very challenging  book, extremely not easy to understand book. The book that would make me feeling intimidated and frustrated. However, I must be very happy with the book.

When I asked him about the feedback, he said my sole feedback was the “Big” idea that we have discussed yesterday, I would never read your report thoroughly and comment on your grammar. I had ever felt envy to my friends who got thorough feedback from their supervisor and I did not. But, suddenly I realized that as usual what I thought he was wrong at the beginning, he was very true at the end. The thing that make me frequently to admit that he is very genius. I realized that I was not under an under graduate student anymore. I must  be fully responsible  with  my own report, and at the end with my dissertation. I must  defend it “under attack” of the  internal examiners by my own. He was the place for discussing the “big” idea, not for discussing technical and administrative stuff. Yes, PhD is school of thinking. Oh God, give me a miracle please!

To be honest, I felt so worried with my first year review viva force.  But, the show must go on. I might be still wondering now, but I believe I will appreciate it later, at the end of the day. Oh, God! help me please ! 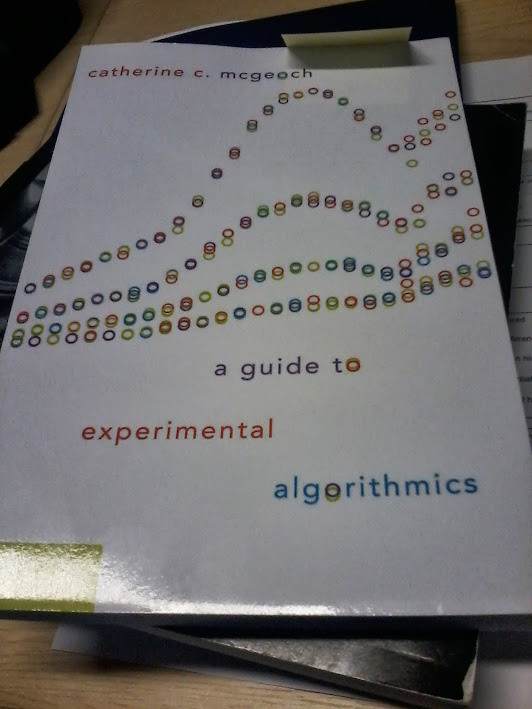 I went back to the Lab. I thought for a while. I returned to the very beginning of the idea of my PhD work. I opened again the slide that my spv gave me at the beginning of my PhD journey. It was about the Philosophy of Fairness and Equality.  I read and read again. I did not know precisely, how many times I had read the slides. The slides that made me intimidated and stressful when I firstly read them, but gradually I got the essence. And at this moment, I clearly got the point. Yes, it is all about fairness solution instead of solely optimal solution in the sense of economic value. It was the big idea. Fairness and equality among the involved entities. Just like in economic growth measure, the growth should not be dominated by a few of greedy people. Unluckily,  it does matter in Indonesia. There was an extremely wide gap between the poor and the rich, even though there was a significant economic growth that the Mr President very proud of. But, he did not care how the economic growth distribution was? was it fairly distributed among the people? or Just dominated by a few greedy people.  It was worth investigating issue, isn’t it? At the end of the day, I will come up with fair decision support system instead of optimal decision support system. Will it change the world? let us see later ! 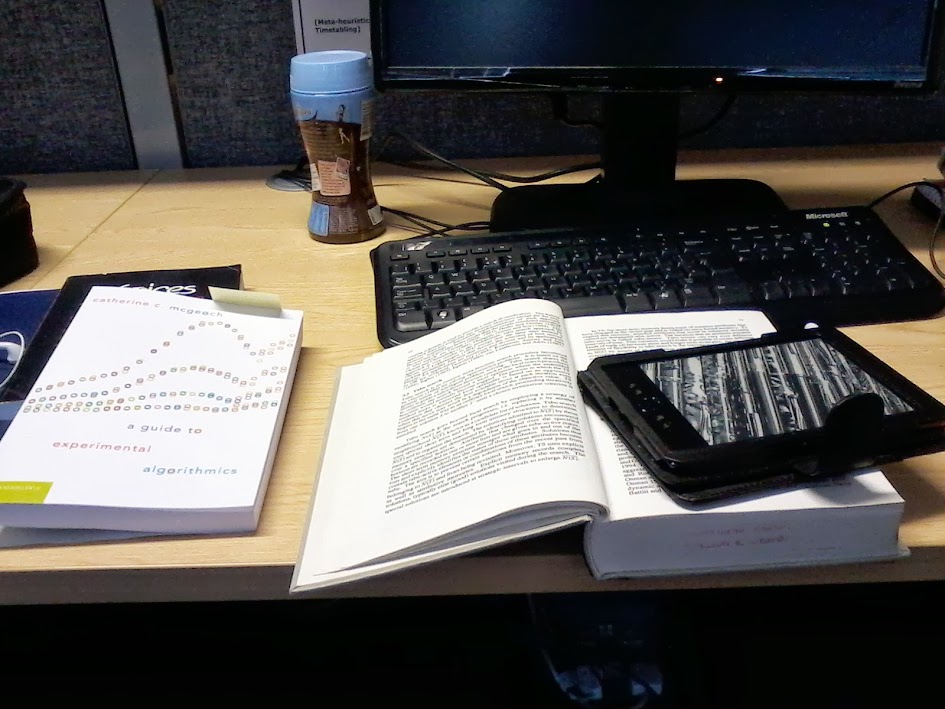 Today, I learnt very interesting, simple yet very applicable decision making problems. It was Stable Marriage Problems. It was a new problem for me that my spv suggest to learn of . It was the problem where the fairness probably does matter. It was problem of matching each people from one set to exactly one people from another set based on their individual preferences. The stable solution should guarantee that no one prefer the other spouse. Fortunately, the exact algorithm to solve this problem has been found. It could be very useful in any assignment problem considering the preference of the related entities.

I also read an interesting paper entitled Why Optimization is difficult?

I left the lab at 09.10 pm to caught the hopper bus to hop to University Park campus for Maghrib Prayer jamaah. I could meet many brothers there, the thing that made me very happy to make prayer in University Park campus instead of in Jubilee campus. Thanks God for the day. I believe and will keep believing on You, the ONE who fully manage and control my whole life. I do believe, you always give me the best in each single of my Life stages. Thanks again, God.